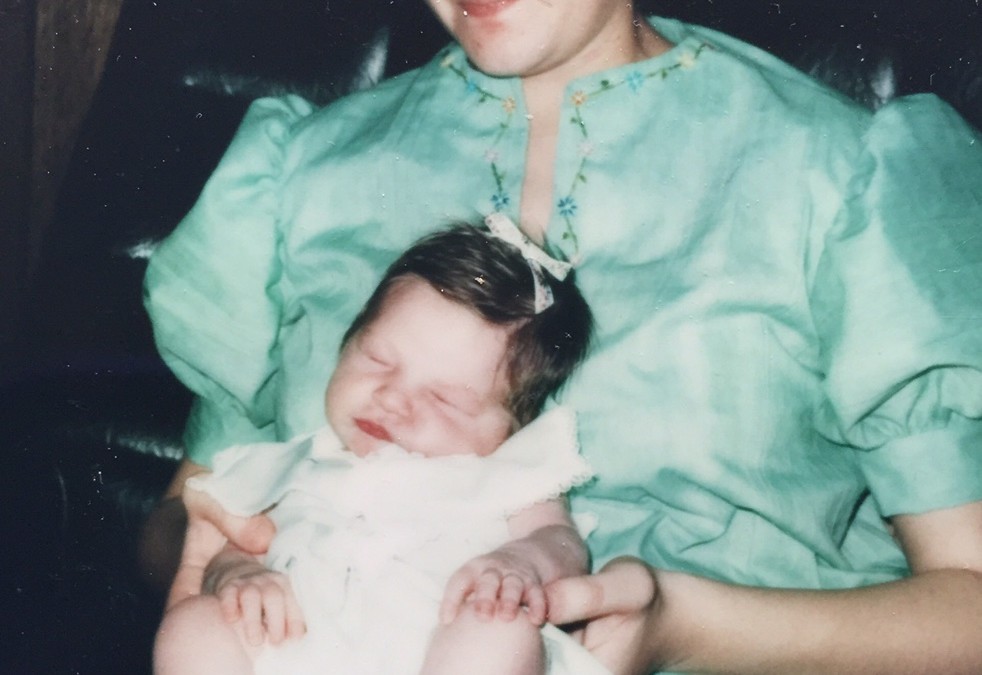 A few years ago, when I first became a birth doula, I asked my mother about her birth story. The birth story that was me. I’d never really thought about it before. But when you delve into the world of birth work, you become curious about things you’d never really think about on a normal basis, like placentas, vernix, and lochia.

Oh, I’d heard a little bit. I was born on Good Friday. It was hot as blazes, according to my mother, too hot for mid-April, even in North Carolina. My dad paced the waiting room, as fathers were not allowed back into the delivery rooms of the tiny twee country hospital I was born in. I’d smiled when she told me about the parade of family and friends who marched into the hospital, bearing flowers, who stared through the glass of the hospital nursery window. How I was one of only three babies in the nursery that weekend. How I was easily identifiable because of the messy shock of thick dark hair atop my head. But that was really the extent of what I knew. So I asked her. What was labor like for her. 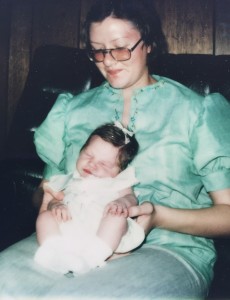 My mother and me

Come to find out, I was a real pain.

She told me, (all cheerfully, of course) that she’d labored with me for about 15 hours, 13 of which were flat on her back, in the hospital, alone. A nurse occasionally coming in the room. She had terrible back labor, and eventually it was discovered that I was occiput posterior, also known as sunny side up , a position that can often cause intense back pain during labor. Of course, my doula mind was racing.  Why didn’t you get up and walk, why couldn’t the nurse get you in a better position, were you offered pain relief? Why weren’t there peanut balls in the 70’s? And how sad was it that during this time, she was alone? She said “That’s just how it was”. At the twelfth hour, she said “A doctor came in, ordered me to curl up in a ball, and gave me a spinal. Soon after that, I started pushing, you weren’t budging, they grabbed the forceps, and then out you came!” 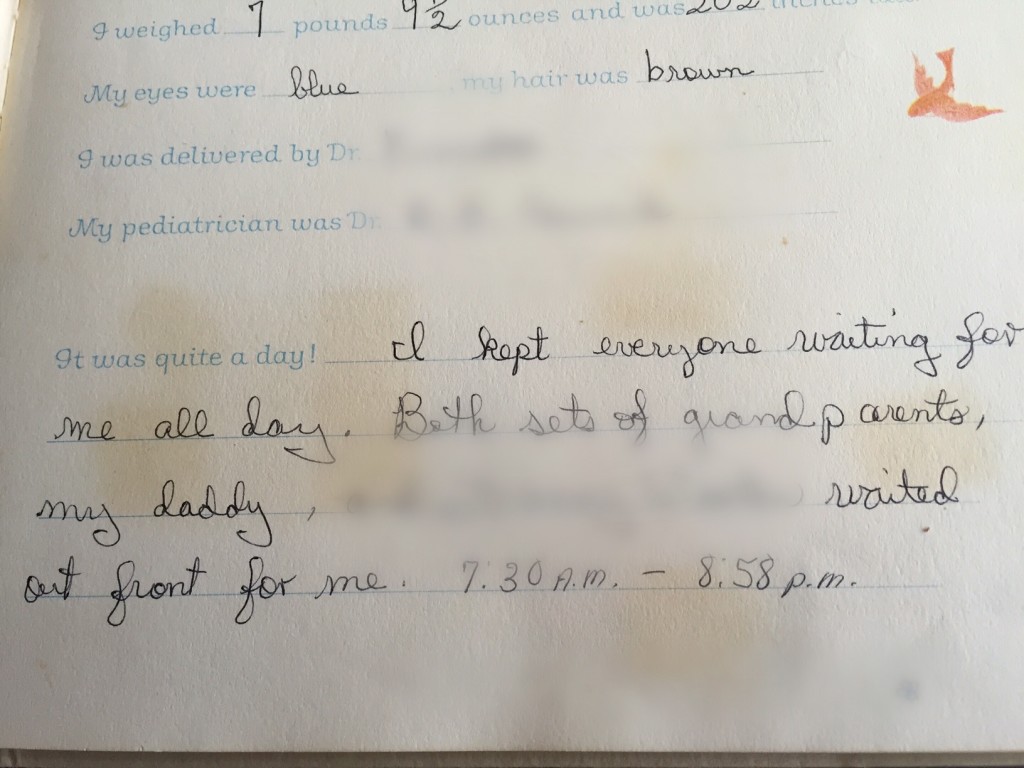 My mother’s handwriting in my “Baby Book”

Insert my wide eyed stare at her here. The look on my face said it all. She just smiled and said, “But I had you, it was all worth it. And besides, I found a new hospital and new doctor when I had your sister three years later” I couldn’t help but inwardly cheer her on for finding a new more supportive care provider, even though it happened years and years previously. (It also provided great teasing material, as I could taunt my sister for being born in Virginia, instead of North Carolina, like the rest of the family)

I lost my mother at much too young of an age and suddenly four years ago this month. Fifteen days before my birthday. Fifteen days before her birth story day. The day she became a mother. I was immensely glad I had asked her the story of how she gave birth to me,even though it wasn’t rosy, even though it was hard. Otherwise, that story would have been lost forever, and I’m so happy to be able to carry her story within me. It makes my birthday a bit more special, to be able to think about her in labor throughout my birthday.

A week and a half after her death, in April of 2012, my sister gave birth to my niece. In the same very same hospital where I was born, and the same hospital and floor where my mother had died. My sister called to say labor had begun quickly, and I started the hour long drive to my hometown. By the time I arrived, she had been taken back into the operating room for a cesarean birth, as it was discovered my niece was frank breech. I waited by the nursery windows, to catch a glimpse of her. Through the glass, I watched my brother in law walk into the room with her. I watched her laid gently in one of those little plastic hospital bassinets, and watched a nurse unswaddle her, watched how her little legs sprang up to her ears, a result of sitting frank breech in the womb. I saw my brother in laws mother and father go into the nursery with their son, with their granddaughter. I watched them stare at her in awe. The doula in me wished the hospital did friendly cesareans, instead of separating mom and baby so quickly. The sister and doula in me longed to be back in the OR with my sister while they finished the surgery, supporting her. The daughter in me wished so badly that my mother was there, to see the granddaughter she didn’t get a chance to see. The human in me smiled and looked through the glass into the hospital nursery that once held me, that now held my niece. Easily identifiable as the one who’s feet kept springing up to her head. One day, I want her to hear what her birth day was like, too. 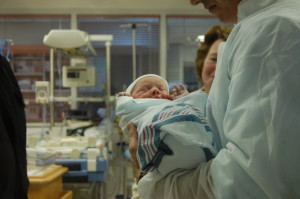 As I turn forty in a few days, and as I enter my ninth year as a doula, I reflect more and more on my mother’s birth story. I know when 8:58 pm rolls around, I will think back 40 years, and will imagine my mother, tired, emotional, staring at my wailing self with my full head of hair, suddenly believing the old tale that hairy heads bring lots of heartburn during pregnancy. I will imagine her relief, her smile, how she felt when when I cried out for the first time. No matter how you gave birth, it is YOUR story. Whether you had an emergency cesarean, planned cesarean, birthed with an epidural, birthed in the water, birthed on a bed, with a midwife, with an obstetrician, birthed in the hospital, birthed at home, or accidentally in a car! However you brought your baby into the world, remember, you gave birth! Share your story. Share with your little ones the fun parts of your story. When your children are older, share the whole story; your story. They will treasure it.

Becky Hale CD(DONA) is a birth and postpartum doula and childbirth educator in Winston-Salem, NC and co-owner of Piedmont Doulas